Cards for No Reason 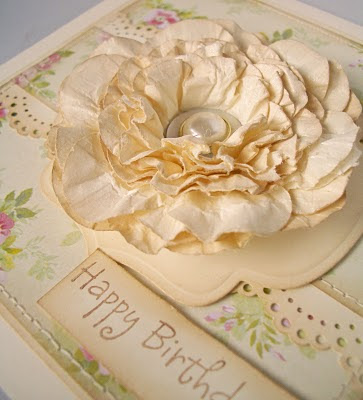 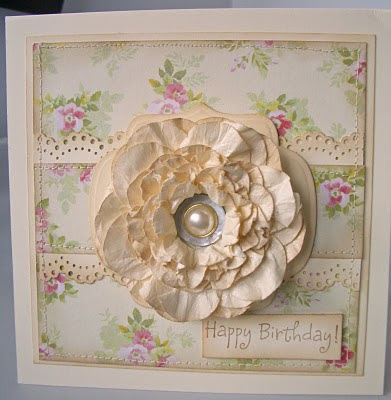 Sometimes I feel like the only cards I get time to make are my DT ones and that there's no time just to play. These two cards were made just to play with making some oversized flowers. I saw a really fab flower when I was browsing through the entries of last week's Shabby Tea Room challenge and tried to recreate it. I haven't really succeeded so I have an excuse to keep on playing.

The first card, which for some reason I don't like too much, uses Papermania paper on SU vanilla card stock. The largest and smallest flowers were cut using the Woodware punches and the inbetween ones were cut on the Cricut. They're not quite inbetween enough which is perhaps why I don't like it. The second card, which I love, uses Pink Petticoat Vintage Rose papers. The flower is cut on the Cricut and is also made using SU vanilla card stock. I actually made the flower for the first card but as it turned out peachy it didn't go. Both cards were made somewhat shabby by distressing and inking the edges. Hope you like. 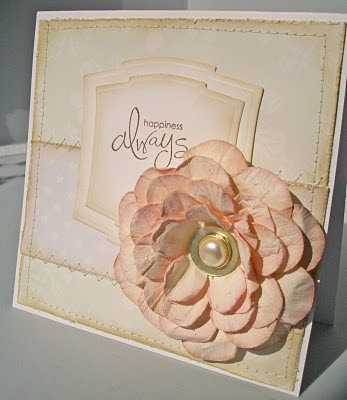 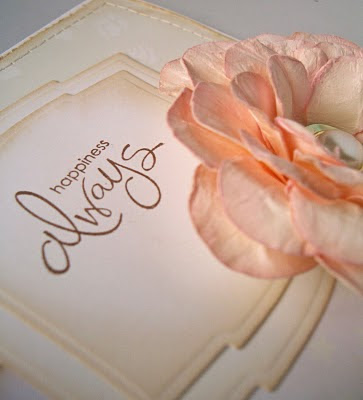 These are just gorgeous!

Beautiful cards, Julie. What did you do to the PP paper to make it look like that? x

I have to agree, just gorgeous:) xx

These cards are gorgeous Julie!, and the flowers are simply amazing. Love the papers too, take care Vicky xx

I love both, seriously, the first is also lovely.

Beautiful cards, Julie. I actually like both equally - I love the patterned paper of the first one, and the peach coloured flower of the second x

I agree with all Hun they are brilliant. I tried making some flowers from a TUT I found. But to be honest patience I havent got and lost my temper in the end.So will go back to trying when I have more time...and in the right frame of mind. Gorguss. Hugs Tammy
xx

These flowers are amazing Julie - love them! Hugs, Claire x

Wow Julie! You are the best at flowers! These two cards are stunning! I love how simple but so elegant your cards are!

These cards are soooo pretty!!

Both cards are stunning and the flowers are brilliant :o)
Jackie xx

Just beautiful Julie and I have that vintage roses set-it is lovely. Hugs BettyXXX

beautiful cards julie.i love the soft colours and your flowers are stunning :)

Well I LOVE the first card AND the second card. Your flowers and ink work are always so stunning Julie - they make a real statement and are very elegant! Can you tell me which Cricut Cartridge you are using please. Warmest of wishes, Lesley

Oh I love both of these Julie! Those flowers are stunning... you've done of beautiful job creating these :)

Your cards are is Gorgeous Julie Cant think of a better reason to create than
Just because`:)TFS
Have a great weekend:)x

These are just lovely Julie, as always your 'way' with colour is just fabulous! Please call in at my blog as there is a little surprise there for you! Jo x

Wow, both are stunning. I love the large flowers.x

i always make cards for no reasons, its always good to have a stash so it can be adapted,This is gorgeous, sorry I have not been to your blog recently

Isn't it absolute bliss to do a card just for fun!! Stunning - beautiful flowers, both equally fabulous.
hugs Heather xx

Fabulous! I have been looking through your blog and your work is outstanding! You have inspired me to have a go at making flowers on the Cricut using SCAL. Thanks and I hope they are as good as yours, they are simply beautiful.