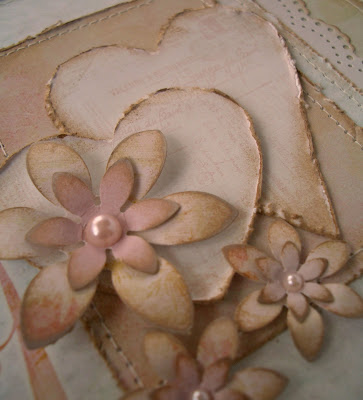 I got asked, last week, to make a special Valentines card but as the recipient sometimes visits this blog I couldn't post it until now. I have to say that's it's been a while since I've made a card I've been this pleased with. I really love it and I didn't get to look at it and stroke nearly long enough before I had to put in the post :) The papers, hearts and flourish are from a kit called The Very Thought of You from the Sweet Shoppe. The colours are kind of non traditional for Valentines but perfect for shabby chic style which I love. And for once all my stiching was as perfect as I would want it to be. 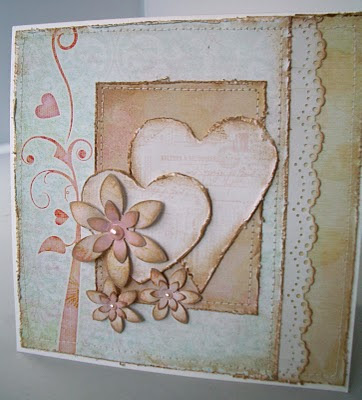 Here's a photo of the inside. I'm usually too lazy to decorate the insides of my cards but as this was a commission I decided it was worth the effort. Would look just as good on the front I think. Anyway tfl and have a nice evening. 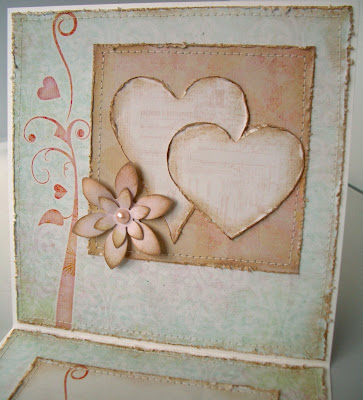 Julie - this is totally gawjus and definately shabby chic to a tee.

Gorgeous card Julie, I love the style of it and the colours are just lovely!

Hi Julie!
What a gorgeous card,love everything about...inside and out!
:)
Enjoy your evening
Hugs Amanda xx

Stunningly beautiful Julie, love the colours, the distressing and your details are just delicious. How could you bear to part with it?
hugs Heather xx

Oh Julie, this is so lovely, I love the distressed look and soft color. GORGEOUS!
Hugs,
Lily

stunning card, it would have been well received. Elaine

A Fabulous card, Julie! I love the simple lines and unfussy design and those soft tones you have used. Warmest wishes, Lesley

Hi Julie - I love your card!! So elegant and I love the touch of distressing!! Your edge inking is perfect!! Juliex

Oh wow Julie, this is more like your old style which I absolutly love. You are so good at doing shabby chic.
Hugs
Tracy

That is so pretty Julie. Gorgeous vintage effect and your blooms look beautiful ~♥~

This is beautiful Julie x

Oh this is gorgeous Julie, so simple but so effective, Happy Crafting, Sue xx

I'm not surprised that you love it, it's superb :o)
Jackie xx

a gorgeous card, love it, sometimes i find it difficult to let go of cards i love

I was the lucky recepient and I adore this stunning creation, it's just so beautiful and I feel privileged to have it. and I'll always cherish it x

Hi Julie this is such a pretty shabby chic card..colours are beautiful..and the insides amazing
hugs Michelle Xx

it is just stunning Julie, no wonder you are so pleased with it! hugs Debx

Oh I LOVE this... just my cup-o-tea, Julie. Beautiful xx

Hi Julie!! Wow! I can see why you love this card so much. It's gorgeous! You might just have to make yourself another one to stroke ;o)
Hugs
Sandra x

Totally fab. Love everything about it.x

I so love your beautiful Shabby chic card Julie..TFI
Have a lovely week:)x

Beautiful Julie, what a romantic and gentle card. LG Andy

Beautifuk colours here again loving the fell of this

Wow,this is a lovely card.x

Pretty how you added the flower to the heart, lovely!

Wow~!!!!this card is amazing .this is more like a work of art.just beautiful.